skip to main | skip to sidebar

What I Am Missing

While we are still in Kazakhstan I'm starting to miss things like:

English: People here speak Russian and it's kind of hard to converse with them but we do like when we were at the Doner Cafe and we asked it was cow in the hamburger so we went "Moo" a lot and they finally got it.

Clean Water: That is a biggie. Here water isn't filtered like in the USA. We just buy 5 liter bottles from the market and so far it has been good.

Clay: Last but not least I am missing my friend Clay. He called me once bit I can't call him because it is a dollar a minute and we can't afford it.

Over all, I think I can live without these (except the last one) but I am OK.
Posted by Cindy LaJoy at 7:29 AM 5 comments: 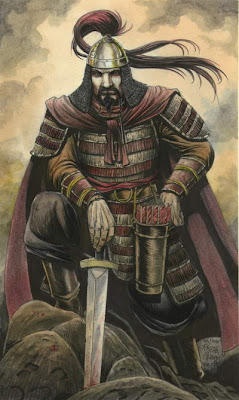 Ghengis Khan was perhaps the world's greatest conqueror. He was the man who managed to pull the Mongols together and take over half the world.

It all started with a young boy named Temujin which means "iron". Temujin and his dad were tracking a horse. When they found the horse it was with another tribe's horses. It was a tribe they had never seen before, so they went in and had supper while his dad managed to score a good wife there for Temujin. After that his dad wanted Temujin to get acquainted with his new wife, so his dad went back to the tribe but the next day his dad was found dead in an enemy camp.

Later Temujin took his fathers place in the camp. Most of his people left him, only a few people stayed. Then one night raiders raided his camp and drove the herds away. Temujin and the children fled to a mountain, where the girls and younger children stayed in a cave. Temujin and his older brother went in different directions. Temujin went into a forest where he hid for three days and three nights, then he came out and was taken prisoner. Temujin was then put in a stock. When the tribe had a feast, Temujin pushed with all of his force into the guards head and killed the guard. Then he ran. When the tribe realized what had happened they raced to find Temujin. Temujin knew that the tribe was coming so he jumped in a lake and breathed through a stick straw.

Years after, Temujin grew stronger every year but there were still some tribes left. Those tribes were raided one by one. The last one he tricked into coming to his side, then he was given the name Ghengis Khan which meant "Khan to the Sea". Then all at once all the Mongols were united under one yurt.

Ghengis Khan started conquering Persian cities, one by one they fell, taking over a good portion of China, Russian, Afghanistan and even some of Europe. It was at the Khan's highest peak when he died, and his empire started crumbling. They say that the great Khan's body lies in an orchard of trees somewhere, but no one knows.

Ghengis Khan built a huge empire, far more powerful than any other one in his time. Ghengis Khan thought he was an instrument of the heavens, and that his tornado-like army was the best in all of Persia...and it was.
Posted by Cindy LaJoy at 6:42 AM 11 comments:

Just Don't Leave Me Behind!

Matthew wrote a fiction piece of his choosing:

“Look at that blue moon!”

“I wonder if that means something? Let’s go look to see if we can get a better view.”

“Andy, don’t leave me behind!”

“But beware of the snakes.”

“Why do you say that about snakes, Barney?”

“Because there’s snakes and I hate snakes!”

Meanwhile, Andy, Barney and Joe went out to get a better view until one of them tripped on a trap and he fell. The other two grabbed on to him but they all fell into the trap, but mysteriously there was a door leading out so they took it and they ended up in a room full of masks, candles and weapons.

There were three doors but they had symbols above each of them. One was a skull and cross bones, another was a picture of stairs, and the last one was two letters which said “WC” which means “Water Closet” and Andy really had to go so he went, then they went in the middle one with stairs. They went up about 32 flights with 20 stairs a flight so it took them a long time.

“I wonder what that means?”

What I Have Learned

I bet the girls are feeling pretty hopeful that they are probably going to get a family and be in America in a few months. Maybe even happy to get brothers too!

If you think about how much we’ve learned on the trip, we’ve learned a lot such as patience is the answer, God’s path may be hard but try as hard as you can to stay on it. Third of all, forgiveness may be hard but try to forgive as much as you can, because God told us to forgive and forgiveness leads to happiness and love and joy. Fourth, courage is very hard but YOU can do it. These are all things Angela and Olesya mostly did and they are only 11 and 9 years old.

Today we are going to visit the girls and I hope today that the girls will not act snotty and mean like she did the first few days. This is what I hope to see out of Angela: Nice, laughing, smiling, giggling, etc. Why we didn’t leave Kazakhstan was Angela called on her friend’s cell phone to talk to Irina so she could tell us that she was wrong and that kind of stuff.
So Mom and Dad are going to go comfort the girls and we are just taking things one day at a time.


When we saw the girls we brought them to our apartment to play. First we decorated the apartment with window clingers which was kind of fun for all of us because when they didn’t stick we punched them on and Mom was saying “Put water on it to make it stick!”. When that was done we colored with glitter glue, then we ran around trying to “taze” our translator, Irina, with a Lego Tazer we made.

After that we ate lunch with salami, chicken, bread, tomatoes, cheese, and juice. When that was done we played more games.

Today was a really fun day. Angela played with us today and she asked if she could stay longer, which I think is a good sign for us.

The day before was a lot like today…fun, smileful…but we were mostly looking at a Russian to English book which was full of colored pictures. I felt good yesterday, but today I feel great and I hope they are feeling great too because then we can be a GREAT big happy family!!
Posted by Cindy LaJoy at 3:53 AM 9 comments:

After we went home from the orphanage yesterday we all started crying and we had a big talk about if we should go home or stay here and look at other kids. We all decided to sleep on it.

The reason we didn’t bring home the girls is Angela didn’t like me, I think that she was in competition with me and she totally rejected me. (From Mom: Interesting what comes out in writing, we will be having a long conversation about this thought he has internalized). Olesya on the other hand liked us and we went to the Doner Café with her and she played with us. It was pretty fun for all of us.


When we were talking to the Assistant Director we told her that we didn’t think the girls were a match then we gave reasons. I feel sad that the girls are not coming home.
Posted by Cindy LaJoy at 11:39 PM 39 comments:

I would like to address some people in Montrose and tell them how we are doing.

There is not much wood here, so you wouldn't do well with your shop. And it is too cold. We miss you! Tell Ms. Jane "Hi".

To Zacky: There is a kid named Yannik and he likes to play superheroes, so I think you might like him, but he lives in Canada. Tell your mom it is barbaric with no way to hear Michael Jackson. Give Shae a hug. And tell your dad hi.

How is your school work going? Have you gone swimming without me? Did Subway get any new types of foot longs? Miss you!

Thanks for visiting my blog. Tell the ladies who sit in front of us to try not to take our pew!!

Daddy told me you're sick. I hope you feel better. 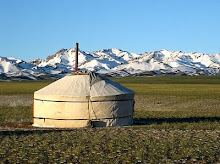 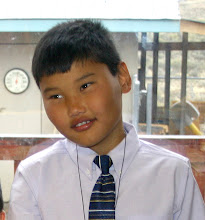 I am Matthew LaJoy and I was born in Aktobe, Kazakhstan. I am 10 years old. I am excited about going back to Kazakhstan to adopt my sisters. I am the son of Cindy and Dominick LaJoy and I have two brothers, Josh and Kenny. I love legos, RTS (Real Time Strategy) computer games, TaeKwonDo and school.